Gaddafi is hiding in a Darth Vader costume 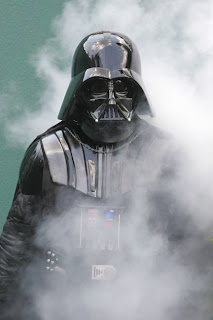 Clan wars. -He spends more and more time with his imaginary friends, says one of his nurses in an interview with Hide & Seek.

-After the revolutionaries teamed up with the West he build a dictator alliance with Darth Vader. He tried to get Russia and China onboard but they said they had to draw the line somewhere.

-We have to dress up in these storm trooper costumes at work now. It`s really getting out of hand. He walking around with the light saber picking fights with his sons. I have to get out of here!


-He ordered to kill Han Solo?! He thinks it`s the Millennium Falcon whos bombing Libya. His people are following Harrison Ford to find out where he is. I don`t know how much longer I can take this...