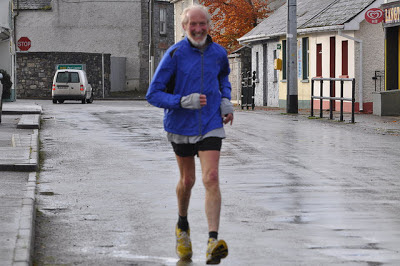 -There's no award for that kind of shit. Who swims across the Atlantic? Nobody. Who runs 385 marathons? Why?

Apparently it was not for the money or fame or anything modern. It was for the running itself and apparently lost sight of time. He had the ipod on autorepeat and with the new lithium batteries he ran out of music after 385 marathons.

The guy doesn't want to answer any questions from the press, especially in the areas of "Are you married?" "Do you have kids?", "Don`t you have a job to go to?" cause he knows the answers screw up his life.

-I have to convince my wife I was abducted, but I don`t think I should go for aliens. I probably have to settle for terrorists and get some scratches on my body. I already got the skinny look down. I could potentially be a hero here.

The guy admits to himself that it was a great run. -It went from good to great the moment I realised I was running away. I`ve never felt better. All humans should do this once in their lifetime. All 7 billion of them.