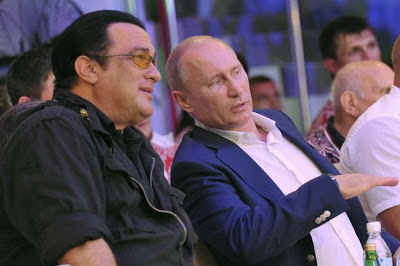 Vladimir`s boy. Obama wasn`t interested in having Steven Seagal in the White House, so the Russians snapped him before Kim Jong-un got hold of him.

-He should be thankful cause Seagal had some interesting ideas on how to make peace with North Korea: "Kill Kim". With the balls on that guy he would have done it, says Putin.

-His views are interesting and refreshing, I particularly like his reasoning for killing Kim: "He`s bad", but I think I will ask more about martial arts next time.