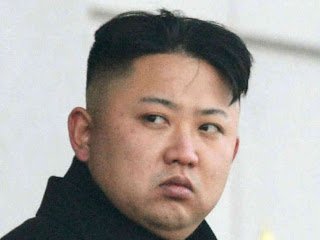 Signature bomb. The Supreme Leader is said to do well among his staff of scared shitless people.

-He`s got that "bad angry boy" look down and he`s getting increasingly better at "fuck you", but he`s still miles away from the "blow up the world" smile. But he`s getting there. He`s come to the point where he believes it himself.

-He refuse to use "death to America" or any of the infidel catchphrase.

-He wants his own signature line and currently consider "I`ll be back". -Hitler took from Chaplin. You steal from the greats. Why would I rebrand a stupid tagline like "It`s crystal clear!" from that stupid Clear Coke disaster campaign?!